there was one day when holly and keemin needed to work, so i ventured to the outskirts of town to the jurong bird park by myself. it was an easy train to boon lay and one stop on bus 251 and i was dropped right outside the front gate.

as i headed toward the ticket counter, there were bus loads of tourists on their way in and i was thinking i would be fighting for views the whole day. however, there wasn't anyone in line for tickets and once i passed the tram boarding area (free tram ride with the ticket), i was practically alone. it looked like hardly anyone opted to walk the park and very few of the bus loads even got off the tram for a closer look at many of the exhibits. needless to say, i didn't have to fight for any views!

because i had the whole day to myself and no other visitors around to bother me, i took a seat at many of the enclosures and aviaries to just watch the birds. possibly my favorite long stop was at a viewing area in the african waterfall aviary. this aviary was HUGE, and as its name suggests, it enclosed an entire (mandmade) waterfall. at the top of a short climb upwards there were several feeding stations that a myriad of brightly colored birds were visiting.


another unexpected highlight of the bird park was seeing an awesome bird that i never expected to see in person - the shoebill! native to east africa, it is actually a fairly gigantic bird, think pelican size. he was just so impressive to watch.


did you know that parrots are left- or right-handed? me neither. i learned it in the extensive parrot paradise exhibit.

not only did i get to see some birds that i have always wanted to see in person, but i also discovered birds that i never knew anything about! one example - the goliath palm cockatoo. another impressive creature.

did you also know that the australian pelican has the longest beak of any bird in the world? apparently up to 500mm. for your reference, female kiwi bills are generally over 100mm.

aside from those babies i saw in incubators at the breeding and research centre, i spotted a few chicks and juveniles in nest boxes around the park and in various aviaries. this little cutie stuck his head out while i was wandering through and he just stared at me with the most adorable, fluffy face! i could have watched him for hours, he really made me giggle. 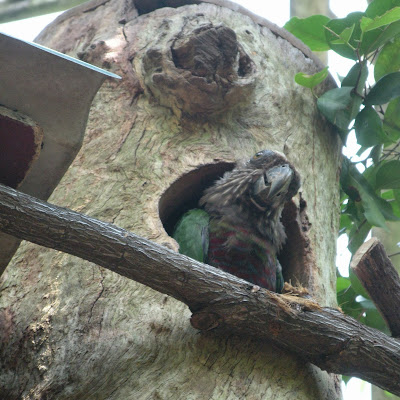 i can't remember exactly, but i think this might have been the jungle jewels exhibit and i came through just after feeding time so the aviary was particularly lively.

even better than watching the zoo staff feed the birds was feeding them myself! in the very extensive lory loft, there were board walks and swing bridges winding through the tree tops. a spiral stair case rose through the center of the exhibit and was lined with feeding stations of small cups of liquid food. i was surprised when the lories flocked to me, they were hardly hesitant or shy at all. again, i could have stayed there for much longer playing with the birdies!

i was very impressed with the park as a whole, including how well the birds seem to be taken care of. the exhibits were large, there was always ample access to water and enrichment activities and i didn't spot any animals that had obvious signs of stress or malnutrition. the only exception was the birds of prey, who i felt really didn't have the space or enriched environment they deserved. it was unfortunate to see these otherwise majestic birds in a rather lackluster situation.

the hornbills and tucans were another surprise to me - i had no idea there were so many different species! more great discoveries.


and i am sharing this picture because i just love this bird. he was such a camera diva.

and to finish off my day, i managed to catch the high flyers show where, during the finale, 90 birds were brought on stage. it was a little bit cheesy, but it was ultimately entertaining and i was impressed with all of the trained birds that emerged at the end.

you might have noticed that i really enjoyed this trip and i was actually really happy i went by myself because i spent literally all day there without feeling guilty that i was boring a non-bird enthusiast to death.

Unknown said…
When Deb came to visit earlier this month, we spent the whole day at the bird park, too. We sat, watched, stared, and talked to many of the inhabitants. We even captured a clip of one of the parrots singing a bit of "Happy Birthday". It took us a few minutes to figure out what he was singing, but once we got it, we couldn't stop laughing, and prompting him to do it again. And recording it to send to Sarah, as it actually was her birthday!

We also hung out in the Lorry Loft - Deb bought some food to share with the lorries, but a bunch of them still hopped up on my arm (no food), and proceeded to nibble at...yep, you guessed it...the Baby G! I really have to figure out how to get video onto my blog....
September 24, 2013 at 12:32 AM